Something interesting has popped up on the live realms, the legendary ring upgrade can now be bought for 1250 Valor Points per upgrade! This will give you another incentive to run Mythic Dungeons if you haven’t upgraded your legendary ring to ilvl 795 yet! 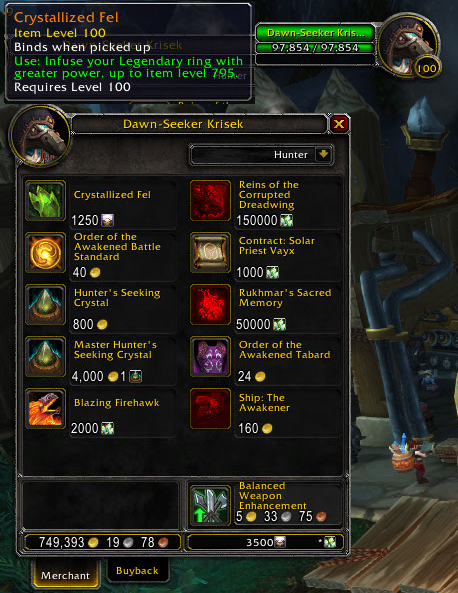 What should you do today in WoW?

We released a small new tool on the website this morning for those that aren’t sure what they should do in WoW today! You can find it here at wowweekly.net/whatshouldidotoday .

Now that thanksgiving is over a lot more content has been released on the Legion Alpha!

The World of Warcraft: Legion alpha test is now underway! A small group of testers have already been trying their hand at the Demon Hunter, and today we’ve added some new areas for players to check out. Alpha testers can now explore the Stormheim and Highmountain zones, as well as the Halls of Valor dungeon. All classes except for Shaman are now available; character copy is currently disabled, but testers can create high-level characters using templates we’ve provided.

There’s no NDA (non-disclosure agreement) for the Legion alpha, so those invited to play are free to stream the game and take screenshots or movies. Please keep in mind that Legion is still in development—we’ll be making changes to the game as we continue to prepare for the upcoming beta test, and what you’ll see during the alpha test is not necessarily representative of the final game.

Players selected to participate in the alpha will receive an email invitation directing them to download the alpha client directly from their Battle.net account. As always, please be aware of phishing attempts—if you’re unsure whether your invitation is legitimate, please log in to your Battle.net account to verify that there is a Legion alpha license attached (under Your Game Accounts).Getting Started

Once you’ve launched the game, use the Legion alpha template to create a character. This is located near the Enter World button. 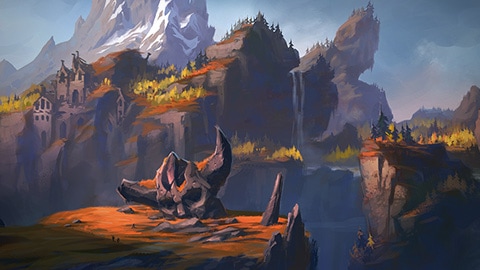 We’d love to hear about your experiences on the Broken Isles, so once you’ve had a chance to play, please send us your feedback.

Once you’ve set up a Battle.net account and have attached at least one Blizzard game, you can choose to opt in to future beta tests from the Beta Profile page—just check the box next to which games you’re interested in testing. Once that’s complete, it’s simply a matter of waiting for an invitation.

Welcome to the WoW Weekly Design Corner! In this editorial series I (Mezzy) look at different parts of WoW and see how I would design the next new thing, or perhaps improve upon it. The following designs and mock content are NOT official content.

Last time we found ourselves in the Halls where we encountered the servants and occupants. But today, we climb the tower of Karazhan where we will find our final challenge to overcome before the rift in time and space can be closed: The Echo of Medivh.

When designing the final wing/boss I wanted to make something that was memorable. It was a final boss fight, but didn’t necessarily have to be complex. In the end it does have some more chaotic elements to it that you can’t control, but also some more fun aspects to it through the fighting of not just the Echo of Medivh, but the echoes of foes you’ve fought in the past. In normal/heroic you fight just those within TLHoK, but on mythic you’ll encounter the abilities of foes beyond the halls. Which in the end makes for a really fun (theoretical) encounter!

Other than a video I hope to release in the future to bring the Time-Lost Halls of Karazhan further to life, this will be it for the TLHoK. I certainly hope you enjoyed it! 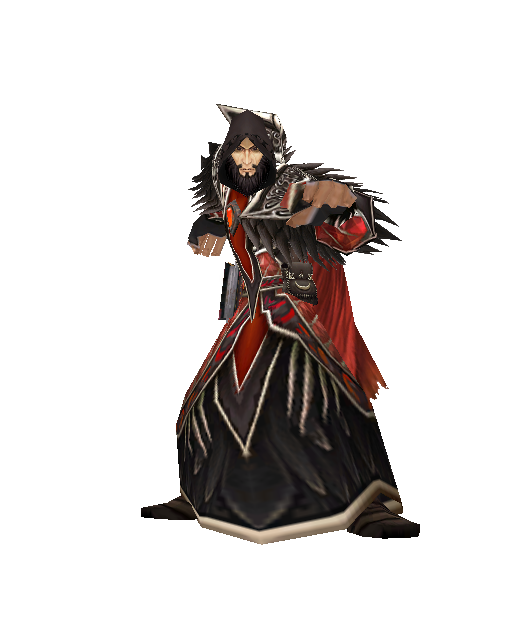 The Echo of Medivh prevents the Time-Lost Halls from disappearing, keeping the portal to Draenor open. Defeat the Echo to close the rift in time and space. 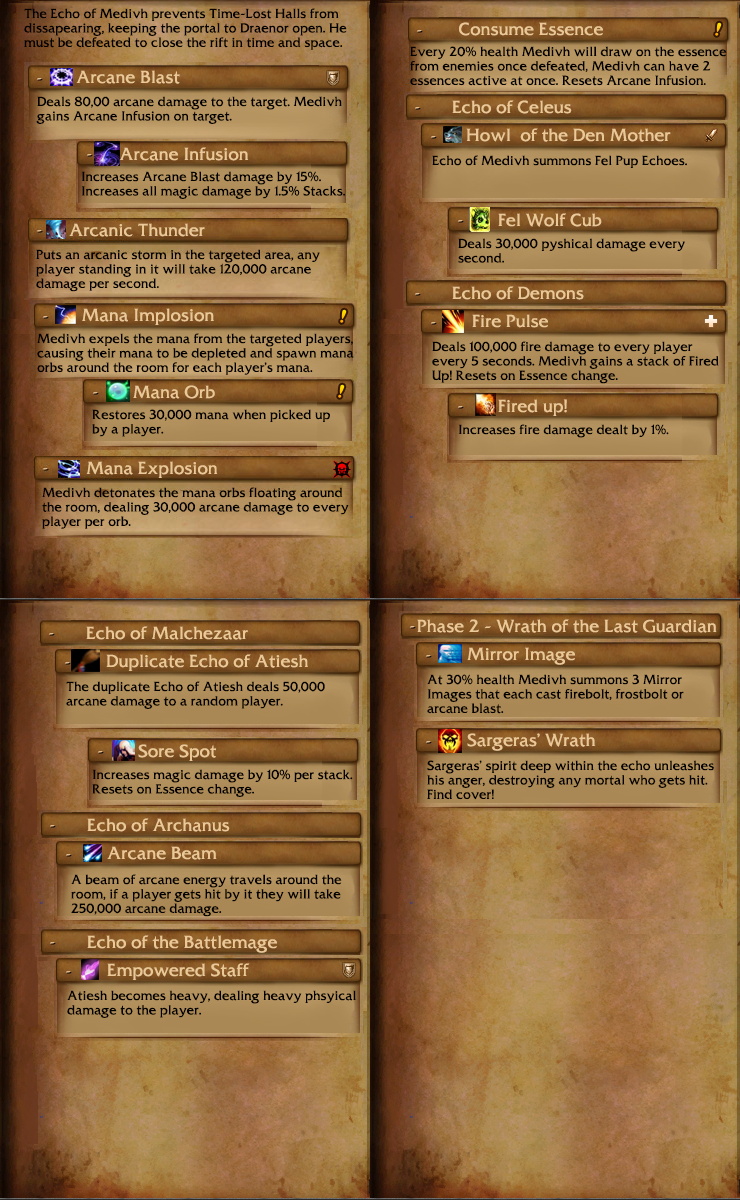 On Mythic Difficulty Medivh draws upon the powers of enemies you have faced in the past, outside of the Time-Lost Halls. This replaces the Echoes from normal/heroic. 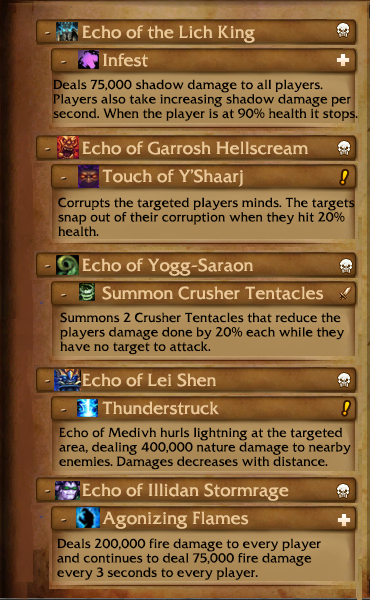 So what do you think of the final encounter in the Time-Lost Halls of Karazhan? Do you like the raid instance as a whole? Let me know in the comments!

Tuesday’s maintenance period will also mark the end of the current PvP season and the beginning of Warlords Season 3. In the new season, you’ll have a chance to earn new PvP gear, including the Warmongering Aspirant (PvP item level 715), Warmongering Combatant (ilvl 730), and Warmongering Gladiator (ilvl 740) sets.

Check out the links below for more, and we’ll see you on Draenor!

Warlords Season 2 PvP Ending Soon
How did you do in Season 2? Get ready for Season 3.

Item Upgrades and Valor are back!

The actual trailer will be shown at Blizzcon on friday, but a teaser was released today.

After an in intense season of conflict in Arenas and Battlegrounds, the time is coming soon to see who has climbed to the top of the PvP ranks. Prepare to fight your last battles of this season, and remember—there is no substitute for victory!

Warlords Season 2 will be ending as soon as a few weeks from now. Once the season ends, we’ll begin a roughly two-week process to determine end-of-season reward eligibility.

All players who believe that they may have qualified for Warlords Season 2 awards should note the following:

In war, you win or lose, live or die—and the difference is but an eyelash. To the battlefield!

The podcast is back this week, we cover the upcoming changes in patch 6.2.3: Cataclysm Timewalkers and Valor points. We also speculate about what we could expect from Blizzcon next week.