We’re back with the podcast this week and talk about our experience on the alpha so far and what we think of the class artifact quests. Beware of spoilers!

The podcast is back for a post-blizzcon session! We go over pretty much everything that’s been covered for Legion.

Welcome to our World of Warcraft: Legion class preview series. In this entry, we’re exploring the Hunter—to find out what’s in store for a different class, check out the overview.

We begin our early look at class and specialization design with the Hunter. In these blogs, we’ll be exploring class identity, discussing Legion’s new designs, and presenting core combat abilities for each specialization—laying out a foundation upon which talents and Artifacts will build further. With that in mind, let’s delve into what it means to be a Hunter in World of Warcraft.

In many ways, Hunter design in Legion embodies our key philosophies for class change. Hunters have a strong “core fantasy”: they’re masters of tracking prey, experts at sniping enemies with bows and guns from a distance, tamers of wild beasts, and trappers of unsuspecting foes. The challenge with the Hunter class in WoW is that, for the most part, while all three specs deliver that basic fantasy, the distinction between them is fairly minimal. In Legion, we’re focused on better differentiating these specializations to deliver more dynamic and varied experiences. 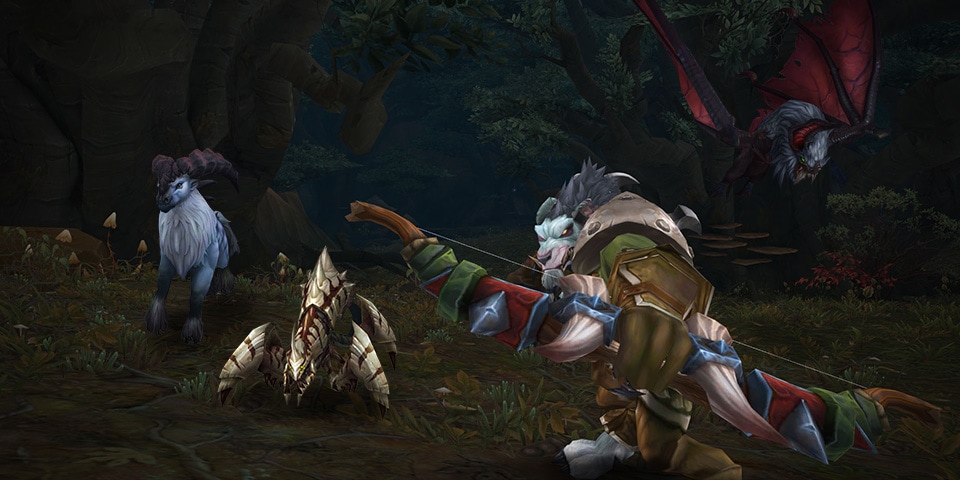 Among the most gifted hunters, there are those who have from birth felt a profound bond with the creatures of the wild. These beast masters are drawn to the perilous primal world, invigorated by its dangerous and untamed nature. Primitive landscape becomes home. Ferocious predator becomes kin. Whether in the thrill of the hunt or the heat of battle, beast masters call forth a litany of vicious animals to overwhelm prey and gnaw at their enemies’ will.

“Beast masters are drawn to the perilous primal world, invigorated by its dangerous and untamed nature“

Beast Masters were already in a good place overall, but we’ve refined existing abilities and talents to better differentiate them from other Hunters. Previously, Cobra Shot filled all of your free moments in combat, leaving no time for managing your pet, which should be a defining characteristic of Beast Masters. To this end, and to aid in Focus accumulation, Dire Beast is now core to Beast Mastery, allowing you to repeatedly summon wild beasts that generate additional Focus for you through their every attack.

To give you an idea of the Beast Master Hunter in action, here’s a basic look at their core combat abilities:

Additionally, to provide a glimpse at how some talents may build upon this, here’s one example of a Beast Mastery–specific talent: 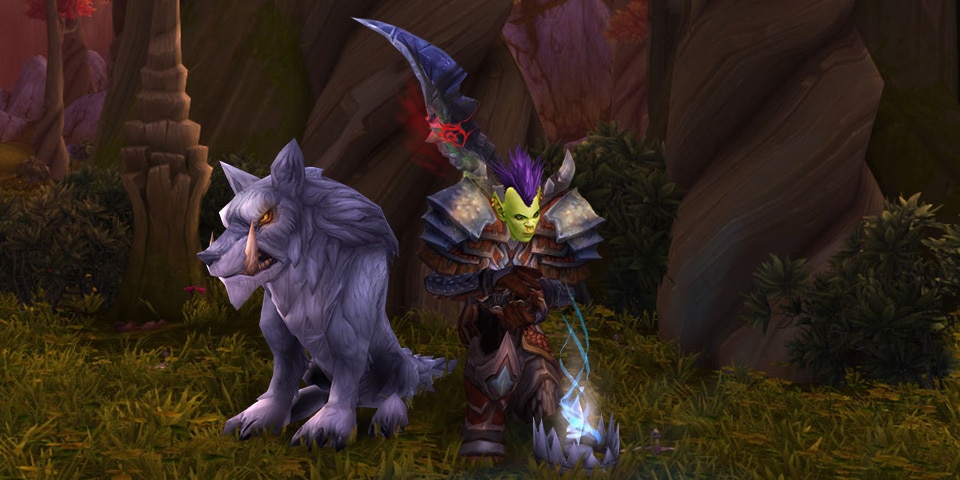 While all hunters feel a calling to the wild, some serve as a reflection of its brutality. To them, the hunt is defined by unrelenting ferocity, where survival means facing one’s enemy eye-to-eye… and is always accompanied by merciless bloodshed. Weapons of great range are abandoned for instruments of close-quarters combat. Survival hunters are instinctive and crafty on the prowl, employing loyal beasts and laying deceptive traps to see their enemies undone. For these hunters know that to truly understand what it means to survive, one must first become familiar with the cruel face of death.

Not only do Survival Hunters use melee weapons instead of ranged weapons, they’re also now the only Hunters that make use of traps—other specs will receive forms of crowd control and AoE damage suited to their distinct characteristics. Survival Hunters will snare and bleed their enemies, fighting them in close quarters with their trustworthy companion to maximize the brutality of the hunt. They have no direct control over Focus regeneration, but instead pool it up during successive Mongoose Bites to further amplify the damage they inflict.

Here’s a basic look at the core combat abilities for Survival Hunters:

Additionally, to provide a glimpse at how some talents may build upon this, here’s an example of one of their Survival-specific talents: 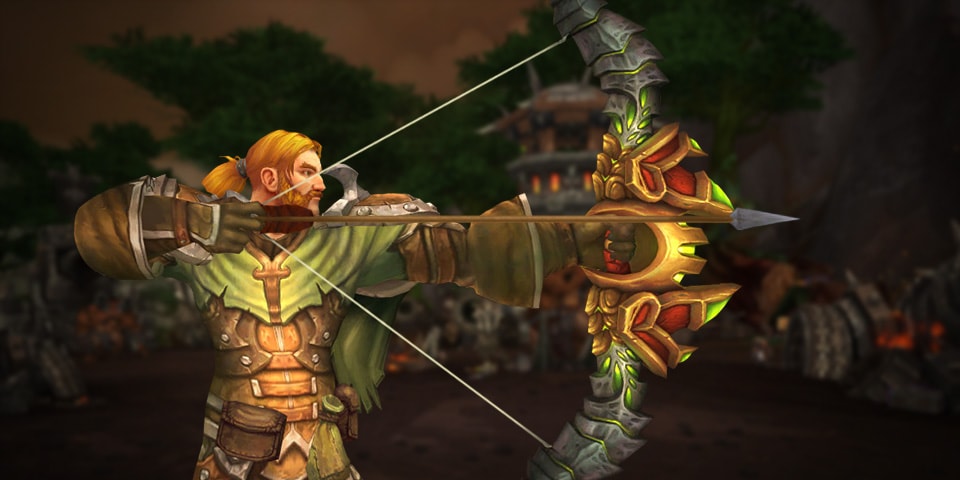 Marksmen, too, shroud themselves in the perils of the untamed wilds, perfecting the use of weapons that are deadliest from great range. They’ve maintained little interest, however, in gaining the loyalty of the many beasts inhabiting these crude landscapes. Instead, the marksman blends into the surrounding environment, surveying behavior of all manner of predator and gleaning deadly methods for stalking their own prey. A sniper in hiding, the marksman unleashes arrows and bullets with deadly precision, exposing the weakness in whoever—or whatever—passes through their crosshairs.

“A sniper in hiding, the marksman unleashes arrows and bullets with deadly precision”

The Lone Wolf gameplay introduced in Warlords of Draenor proved extremely popular with Hunters, and that play style fit perfectly with our vision of Marksmanship Hunters as master archers and snipers, relying on their skill and precision with weapons rather than animal companions. All Marksmanship Hunters now gain Lone Wolf by default, ranging through the wilds without a pet beside them. On the resource front, the Marksman now gains Focus from the use of Arcane Shot. And, as a note for those who enjoyed the previous version of Survival gameplay, we have moved certain abilities, such as Black Arrow and Lock and Load, to Marksmanship-specific talents.

Here’s a basic look at the core combat abilities for Marksmanship:

Additionally, to give you an idea of how some talents may build upon this, here’s an example of one of their Marksmanship-specific talents: 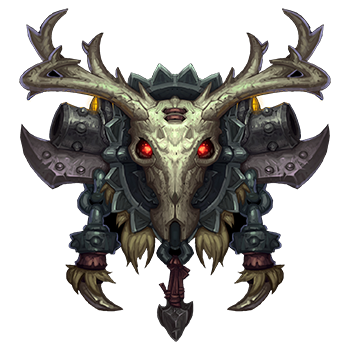 We hope you’ve enjoyed this early preview of the Hunter class in World of Warcraft: Legion. This first look should give you a good sense of what you can expect from this series, though not every class is undergoing this level of change; some are receiving updates that will be more subtle—a sharpening of rough edges—rather than the broad reimagining of the fantasy as we’ve demonstrated with Hunters.

Tomorrow, the series continues with previews of Priests, Mages, and Paladins. Stay tuned!

Feedback started pouring in on Reddit about the new hunter changes and one of the class designers Andrew Chambers used some of his time on sunday to respond! You should check out all the responses on his profile.

The podcast is back this week, we cover the upcoming changes in patch 6.2.3: Cataclysm Timewalkers and Valor points. We also speculate about what we could expect from Blizzcon next week.

This week in the podcast we talk about the first information set we got about WoW: Legion. We cover a whole range of subjects this time including Artifact Weapons, Class Order Halls, the different lore story threads and the “shocking and surprising” events that will occur on the Broken Shore.

Ahead of the Gamescom announcement later this week we took the time to do some speculating of our own on the podcast. From silly “leaks” like Rise of the Syndicate to the Chinese riddle leaks and loose threads that still have to be resolved ingame.

The podcast is back this week and in it we talked about everything major within WoW that’s happened within the last month. The main topics are the subscriber drops, no flying in the forseeable future and the content coming in patch 6.2 and our experiences on the PTR so far.

In Patch 6.2, Warlords of Draenor’s PvP zone Ashran is getting some new quests and an eerie new area to explore. Here’s a rundown of what you’ll encounter on the glorious battlefield between Warspear and Stormshield.

Faction bosses and events will no longer reward Conquest points after Patch 6.2, but will continue to reward Honor points and strongboxes. To fill your pockets with lots of Conquest points going forward, you’ll want to pick up and complete these new quests:

This is new. What could be going on in here?

Meanwhile, Belloc Brightblade and Harrison Jones have followed the siren-like call of a new artifact being unearthed in Ashran. They each offer a quest leading you to fight your way into a new section of the zone. . . .

The Ashran Excavation has been revealed, and its unearthly inhabitants are none too pleased about the presence of you and other visitors.

Once you enter the Ashran Excavation, you’ll find yourself inside a very large underground area. Similar to other parts of Ashran, a competitive event is randomly triggered in the area. When the event begins, your goal is to collect Apexis Marks of Redemption by taking down the Arakkoa ghosts that haunt the depths.

Later on, you can tell all the ghost stories you want.

Somewhere in this underground labyrinth, you’ll find a ghost named Rukmaz—one of the few entities here who doesn’t want to kill you on sight. He’s a collector of Marks of Redemption, and he’s waiting to award victory over the Ashran Excavation to whichever faction turns in 50 Marks first.

There’s a lot going on in Ashran, and if you haven’t fully explored Draenor’s sprawling PvP zone yet, you might want to check out Wowhead’s Ashran Reputations Guide and their Comprehensive Ashran Guide by HelloKitty.  Enemy players are in there right now, just waiting for you to kill them.

Want to get a first look at the next patch for yourself? Join us on the Patch 6.2 Public Test Realm, and share your thoughts and opinions on everything coming to World of Warcraft in our PTR General Discussion forum. If you find a bug while testing, let us know about it in our PTR Bug Report forum.

Quote from: Blizzard
This Saturday, I’ll be joining World of Warcraft Lead Game Designer Ion Hazzikostas to answer your questions live on Twitch.TV! With Patch 6.2 rapidly approaching, we wanted to take the opportunity to not only answer any questions the community has regarding the new content and features in the patch, but also take a look back at the challenges we’ve faced (and the lessons we’ve learned) when developing the Warlords of Draenor expansion and Patch 6.1.

There are two ways to submit questions. If you’re using Twitter, simply tweet your question using the hashtag #WarlordsQA. You can also ask it as a reply to this forum thread; however, as we’d like to get to as many questions as possible, we will only consider questions using 40 words or less. Make them count! In order to be considered, your question must be submitted before 12:01 AM Pacific time on Saturday, June 6.

Please try entering https://graph.facebook.com/822778381143754/photos?fields=source,link,name,images,album&limit=1000 into your URL bar and seeing if the page loads.

The podcast is back this week and we talk about all things patch 6.2 from the new Tenaan Jungle zone, to raiding and the new timewalker dungeons! Below you can find our screenshots of Tenaan Jungle.

Facebook API came back with a faulty result. You may be accessing an album you do not have permissions to access.